Here’s a story from Lesvosâ€¦

â€¦that will never be on the news: 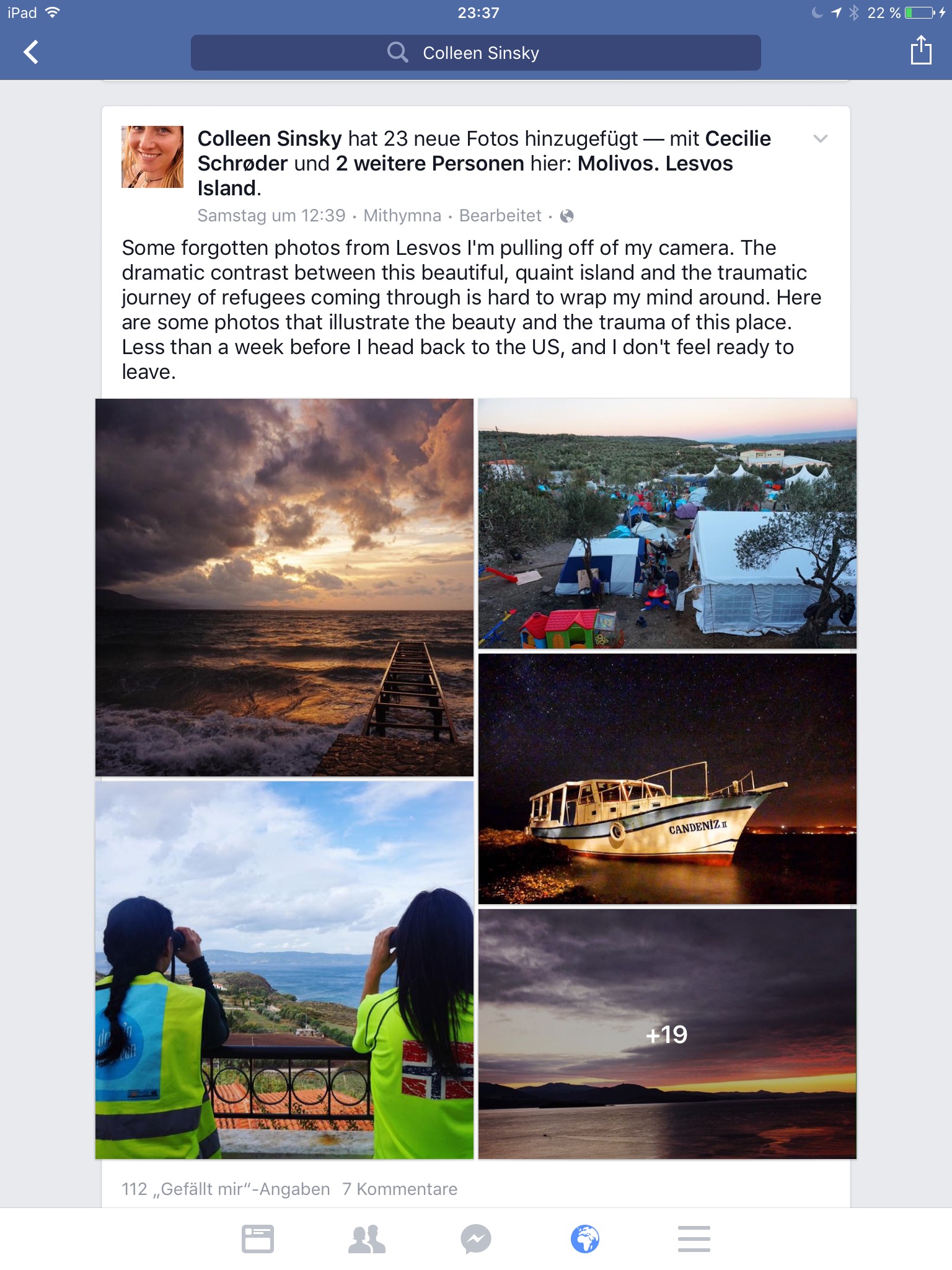 Two nights ago, the Greek Coast Guard got a call that a refugee boat was hours overdue because family members back in Turkey hadn’t heard from their loved ones on board. After searching the dark sea for hours, the Coast Guard found the raft and brought everyone on board to the nearest land- a tiny fishing village-where a cafÃ© was turned into a makeshift Emergency Room. There, doctors and volunteers managed to save everyone, despite many suffering from hypothermia and shock, including a nine month old baby with Downs Syndrome. Throughout the rescue, the refugees were frantically telling the aid workers that there was someone else lost at sea- they had to continue searching.
…
When the engine of the raft had died halfway across the Aegean, and the overcrowded raft began to fill with water, the families on board panicked. The last of their possessions were tossed overboard, but they continued to drift and slowly sink on the dark sea. From the edge of the raft, a tall, broad-shouldered man from Iraq spoke up. His wife and children had been killed by the rockets that destroyed his home. He was alone in the world. To give the sinking raft more time, he would jump overboard, hoping that without his weight, the others on board would have a chance of rescue.

I don’t know how long he floated, or what that frigid, lonesome night in the Aegean was like. I imagine that he looked up at the stars and thought about his wife and children, and how he would soon meet them again. I imagine that they would be proud of him.

Meanwhile, the Spanish lifeguards had heard the story and quickly mobilized jet skis, heading off into the darkness to find him. Every once in a while the lifeguards would cut the engines, scan the choppy water with flashlights, and call his name. Eventually their light fell onto the man’s waterlogged orange life vest, and the lifeguards raced his unconscious body back to the cafÃ© on shore. Doctors and volunteers had few resources, but spent two hours administering oxygen and trying to warm him up. The doctors said that he teetered on the brink of life and death and would not have survived another five minutes in the water. But he did survive. He eventually sat up to ask about the raft and to thank his rescuers in every language he knew. I don’t know his name or where he hopes to go, but I know that he texts his rescuers updates and gratitude daily. I hope he finds a place he can someday call home again.

It’s true that not all refugees are women and orphans. It’s true that they come from a culture that I know little about. And it’s true that it’s easier to think in broad generalizations and to let fear overshadow our responsibility towards other humans. But I would rather live in a country with that man who willingly sacrificed his life, than be part of one that would exclude him.

Thanks to Joakim B Olsen and Maria Kamal, fellow volunteers at A Drop In The Ocean, (http://drapenihavet.no/en/) who spent a long night saving lives and told me their story.

Also to the lifeguards of Proactiva
http://en.proactivaopenarms.org/

And doctors of IsraAid http://www.israaid.co.il/